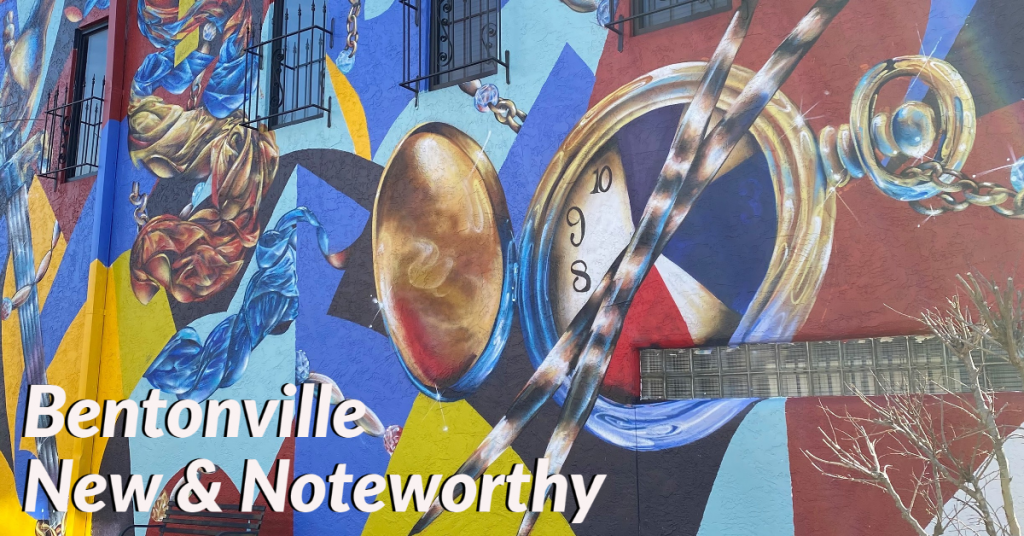 Bentonville, Arkansas is home to Walmart, the world-renowned Crystal Bridges Museum of American Art, and some of the best hiking and biking trails in the country. It is located in one of the fastest growing regions in the nation, Northwest Arkansas. We had the opportunity to sit down with Mayor Stephanie Orman to discuss the city and its continued success. Mayor Orman stepped into her position in 2019, and has hit the ground running making sure the quality of life in Bentonville is not only sustained, but elevated.

Mayor Orman values the outdoor scene that has been created in Bentonville. She understands how important it is for the community to have access to amenities that meet their needs. Mayor Orman works closely with the Parks & Rec department to make sure our parks are taken care of. Bentonville currently has 21 parks which includes playgrounds, dog parks, lakes, and athletic complexes. The Parks & Rec department also oversees the city’s community programs. These programs are offered to Benton county residents and include things like adult and youth sports, enrichment programs, and workout classes as well as special events put on by the city. “When we look at our Parks & Rec programs and different events, we are really looking for our community to support it. One of the things we are really proud of is our ROI on programs is about 62% and that’s extremely high. That means people are participating in our programs and we’re putting out programs that they want,” said Mayor Orman.

In 2019, the city announced a new project in Downtown Bentonville called the Quilt of Parks. The Quilt of Parks has been added to the Master Street Plan to alleviate some of the congestion on the square during major events such as First Friday and the Saturday Farmer’s Market. It includes many new additions around the Bentonville Square such as the A Street Promenade, the City Hall Green, and the Downtown Activity Center. The plan will also feature renovations and additions to Dave Peel Park, Town Branch Park, and Lawrence Plaza. “What we are trying to do with the Quilt of Parks is bring in several different parks each with kind of its own niche and personality to serve and expand that area so we don’t have everyone so concentrated in one area. We already have a thriving Downtown, it’s just making it better.” When designing and planning the Quilt of Parks, Mayor Orman valued the community’s input. The city hosted multiple community input sessions regarding the parks to address questions and concerns. “We’re really engaging our community. What you’ll see us doing with our downtown is we’re listening to the community and putting things in place that the community will support. 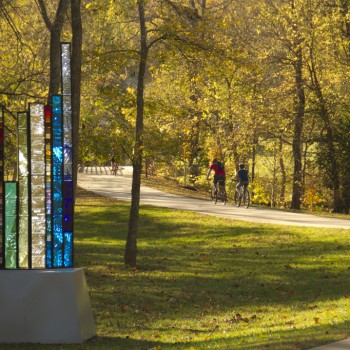 The City of Bentonville and its community partners have made the trail systems a major focus in recent years. Bentonville has gained national recognition for their trail systems and has even been called the “Disneyland for Mountain Bikers” by Outside Magazine. This recognition has sparked great interest in Northwest Arkansas from mountain biking companies. In 2020, Rapha Racing LLC, a high-end cycling apparel and lifestyle brand, announced its relocation of their headquarters to Bentonville, AR. When companies and brands are investing in the community, it validates the city’s efforts to become a biking destination. It took many years to install the trails and cultivate a mountain biking culture in Bentonville. The recent partnership with the International Mountain Bicycling Association shows how Bentonville became a hotspot for mountain bikers. This fall, they are scheduled to host a working laboratory that “lays out everything a community might need to plan, design, build, activate, promote, and measure mountain biking tourism.” Bentonville is a great model for this type of tourism because we have trails to fit the needs of riders from all skill levels. By the end of 2020, Bentonville will have 300 plus miles of singletrack trails for mountain bikers to enjoy. 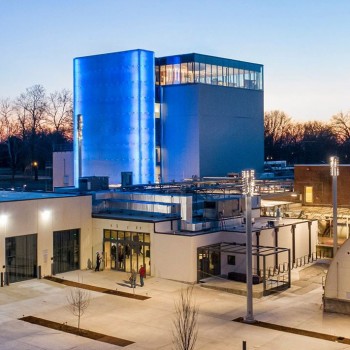 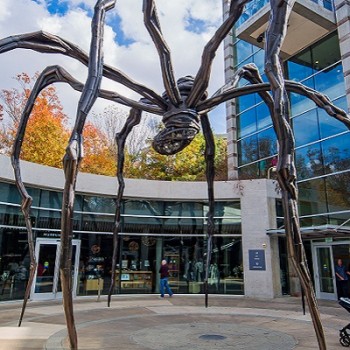 Arts, culture, and history are widely represented in Bentonville. The Crystal Bridges Museum of American Art was founded in 2005 by the Walton Family. It gained national recognition and brings in tourists from all over the country. The museum features a permanent collection spanning 5 centuries as well as temporary exhibits that are rotated throughout the year. In 2020, Crystal Bridges opened a new, contemporary satellite location called The Momentary that is featured below in the New & Noteworthy section. Another museum that is special and unique to Bentonville, is the Walmart Museum. It showcases the history of Walmart from its founding to present day, being the world’s largest retailer. When asked about the impact these community partners have on Bentonville, Mayor Orman said, “Their goal is to bring arts and culture to the masses and to the community. You know that’s really attractive to people that want to move into the area. When you see that your community supports things and that you have a community that can come together and put these types of amenities in, certainly the city wants to support. We are working on the roads and infrastructure to make sure we can get people to those things. It’s really a partnership and we are very fortunate to have really good community partners that we can come alongside with and work together with.”

Bentonville has a lot to offer out of town guests with its museums, trails, arts, and entertainment. The museums alone bring thousands of visitors to the area each year in addition to the number of business travelers. Mayor Orman said “Every Monday morning we have a group of community leaders that meet and one of those is Visit Bentonville. Visit Bentonville collects taxes from the restaurants and the hotels in order to do their job which is to promote the city. They’ve expanded and they are bringing in travel writers all the time and I’ll usually go by and say hi to them. Hopefully they are bringing them in and through their media sources, being able to tell about the city. We’ve tried to put an emphasis on telling the Bentonville story and I think you’ll see us continue to do that.” 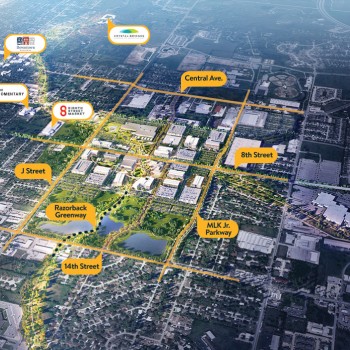 In 2019, Walmart announced plans for a new campus that would consolidate their associates and operations that are currently spread out across Bentonville. This new centralized location will span 350 acres between Central Avenue and 14th Street in Bentontville. It will be a “functioning campus” rolled out in phases with an approximate completion taking 5 to 7 years. Walmart has created a culture that is dedicated to putting associates and customers first. The new campus will feature 15 acres of lakes, trails and bike paths, indoor and outdoor work spaces, conveniently located coffee bars and other amenities available to associates. 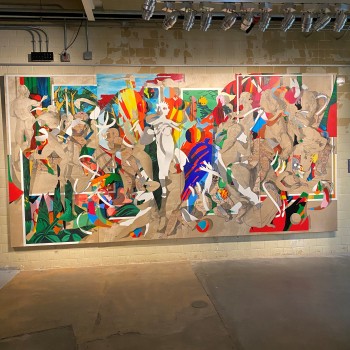 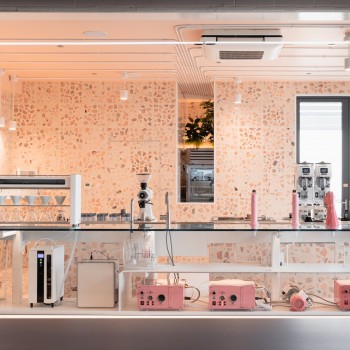 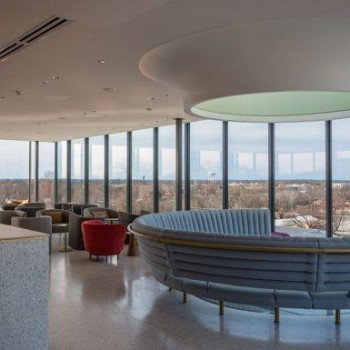 The Momentary, Crystal Bridges’ satellite location, opened its doors in February 2020 as a contemporary art space for visual and preforming arts, culinary experiences, festivals, and more. Located in a 63,000 square foot decommissioned cheese factory, the space boasts both industrial and modern touches that compliment the aesthetic of the museum’s design. In addition to the various art installations and pieces throughout the Momentary, you will also find an Onyx Coffee Shop, a fast-casual restaurant called the Breakrooom, and the Tower Bar has some of the best views in Bentonville. 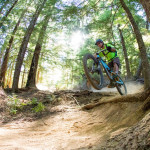 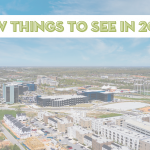